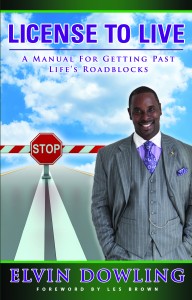 TruthWorks Network is proud to present

Architects of Change with Elvin Dowling

Elvin Dowling is a change coach and motivator and is the author of, License to Live: A Manual for Getting Past Life’s Roadblocks  with A Dynamic Foreword by Les Brown License to Live is Heart of Darkness meets Chicken Soup for the Soul.

He is the former Chief of Staff for the world’s oldest and largest Black Greek Letter Fraternity, Alpha Phi Alpha Fraternity, Inc., with over 150,000 members.  What’s unique about Elvin Dowling?

He brings deep personal experience to his message and audience at every level... Having worked in a homeless shelter, in corporate America, on Capitol Hill, and as an entrepreneur, Elvin possesses the capacity to effectively serve individuals, corporations, organizations and communities.

Elvin was born into poverty to an unwed, teenage mother. And by age 19, he had lost two brothers and most of his cousins to gang and drug-related violence.  At age 16, he was licensed to teach discipleship and went on to earn a Bachelor of Science Degree in Social Science, with a minor in Government and Politics and has completed graduate work in a Master of Professional Studies program at the New York Theological Seminary.  As Chief of Staff for the National Urban League, he served as a liaison to some of the top executives of nearly 500 corporations and organizations in the United States and around the world.

The great tennis player, the late Arthur Ashe once said... “Start where you are. Use what you have. Do what you can.” And in the face of devastating change, Elvin did just that.

He began his speaking career under the sprawling shadows of an old oak tree... in the hard knock area of West Palm Beach, Florida, where he ministered to the outcast members of society.

As an insider, he learned the language of the corporate environment. More importantly, however, as The Architect of Change™, he effectively speaks to the needs of others in a way that penetrates the mind, pierces the heart and inspires the individual to step into their greatness.

Janice Graham, the hard-nose and innovative, well-informed broadcaster and activist and founding member of The Gray-Haired Witnesses, a group said, “ We are so pleased to have Architects of Change to join us.  Elvin Dowling will bring excitement and terrifically interesting programming to TruthWorks.  The program broadcasts g through BlogTalk radio, an internet based broadcast facility and is heard world-wide. For more information about Architects of Change and Elvin Dowling, http://www.architectofchange.com/home.php