“Commentaries On the Times” with Playthell Benjamin Comes to TruthWorks Network

TruthWorks welcomes Playthell Benjamin with “Commentaries On the Times” to our exciting Black Voice Collaborative line up. The weekly program will  feature the best of the writings of Playthell Benjamin with commentary from his renowned virtual magazine, “Commentaries On the Times”. The program will broadcast Thursday, 10 pm ET. Benjamin brings the scope of 40 years of journalism and broadcasting to TruthWorks.  As a former pioneer in the development of Black Studies programs and pundit broadcasting, he comes to a microphone with tremendous knowledge, insight and passion.  Of his products, he labels his wordsmith products as, “Praising Saints, Celebrating Heroes, Unmasking Charlatans, Defending the Defenseless and Chastising Scoundrels”. We expect that his show will be no less. 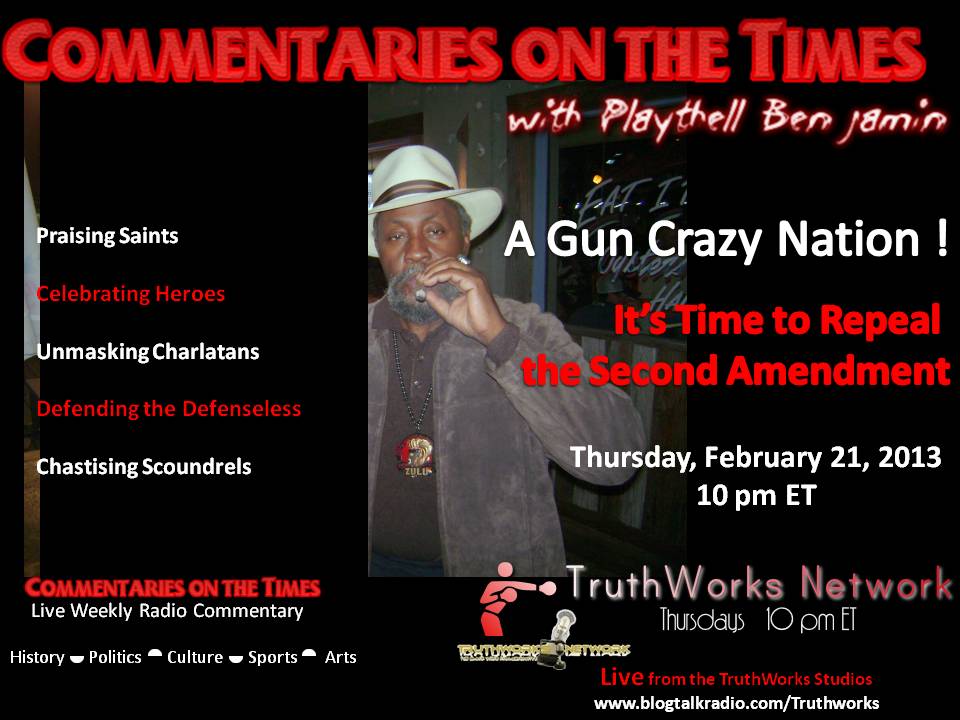 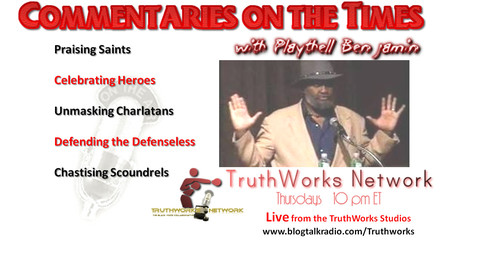 Playthell George Benjamin is the producer of Commentaries On the Times, which he writes and delivers on WBAI radio in New York City,  and a producer with The Midnight Ravers, a long running show exploring the world of art and politics which has won several radio awards for excellence in programming.   He is an award winning journalist who has been nominated for the Pulitzer Prize in two different categories: Explanatory Journalism, Village Voice 1988, and Distinguished Commentary, New York Daily News1995.  As part of the production team for The Midnight Ravers, Mr. Benjamin won a 2011 award  for excellence in radio programming,  given for  The Curtis Mayfield Special.

Playthell has won several prizes ranging from The Unity Award presented by the School of communications at Lincoln University in Missouri for distinguished commentary on race relations; the Griot Prize for excellence in covering a story requiring an exploration of African American history and culture: “Who is Listening to Louis Farrakhan?” It was awarded by the New York chapter of the Association of Black Journalist in December 1989.   In 1991 Mr. Benjamin won the NYABJ Magazine Awards for Feature Stories,and in 1996 he won the first Annual Tom Forcade Award “for honesty and accuracy in drug reporting” awarded by High Times magazine for his columns on drug use and abuse in the New York Daily News.

His book, “Witnessing the Motion of History” is expected to publish in the Summer of 2013. His e-magazine covering analysis, commentary and presentation of issues and events is available here:  http://commentariesonthetimes.wordpress.com/

From 1991 – 1996 Playthell was a regular contributor to the Guardian Observer of London, where he wrote on politics, culture and sports. He also wrote for the Sunday Times of London, particularly in the prestigious magazine, The Culture, which addresses cultural matters high and low.  In the London Guardian he wrote feature stories ranging from the television coverage of the Los Angeles race riot sparked by the Rodney King incident, to the courtroom genius of the great First Amendment Lawyer Martin Garbus, as well as the O.J. Simpson Trial, The Mike Tyson Rape Case, The Inauguration of Bill Clinton, Concerts at Lincoln Center, and the Sista Souljah vs. Bill Clinton incident. Mr.  Clinton’s saxophone playing was also subjected to serious critical evaluation in an essay titled “He may be the Leader of the Western World…But will he ever be President of the Saxophone? For The Sunday Times he wrote about the Youth Jazz festivals convened by the peerless jazz vocalist Betty Carter, Michael Douglass’ movie on the desperation of displaced white workers, Gangsta Rap, Jazz, etc.

At the Village Voice Mr. Benjamin wrote important stories on politics and culture, and as an Editorial Columnists for the Daily News he wrote about all the great issues of the day.  Some of his most insightful columns were about the attempt to construct a post-communist society in Russia. In the nominating letter for the Pulitzer Prize for Distinguished Commentary Editorial Page Editor Arthur Brown wrote “With a perspective that comes out of the black experience, his column in the Daily News last year took on topics ranging from the celebrations of D-Day, which he assailed as Eurocentric, to gangster rap, which he denounced as a danger to American youth.  He wrote about foreign affairs and the OJ Simpson case with equal insight.  He took on demagogues of the right and left, both black and white, with equal fervor.” The nominating letter and the ten columns submitted for the Pulitzer Prize are included in Playthell’s  press kit and is available upon request.

Mr. Benjamin’s series Commentaries on the Times, which he writes, produces and performs over the airwaves of WBAI radio, and publishes the texts online, formerly for The Black World Today and The Black Commentator, is even more impressive than his Daily News Columns.  Whereas the News columns were a maximum of 700 words, his internet columns sometimes run to 11,000 words – See, “On Being Black In London.”  His column “The Iraq Attack: Bush’s March of Folly,” was read over WBAI on the eve of the invasion of Iraq and published on-line now reads like prophecy.  When all of the major pundits – including the three time Pulitzer Prize winning New York Times foreign affairs columnist Tom Freedman – were cheerleaders for the attack on Iraq Playthell said it was folly and would define Bush’s place in history as a blunderer who led us into a disastrous war of choice based on disinformation.  This commentary can be read on this blog: Commentaries on the Times.wordpress.com.  See: The Prophetic Commentary on Iraq.”

His works, essays and fiction, are anthologized in several books and he is the co-author of Reconsidering The Souls of Black Folks, a reassessment of the classic 1903 text by Dr. WEB DuBois on the centennial of its publication.  The book, written with Macarthur Genius Award winner Stanley Crouch, is a dialogue rather than collaboration, with Playthell and Stanley’s contribution appearing under their own bylines.  Playthell does the heavy hitting here writing four fifths of the book, and Stanley riffs off of his arguments.   In the foreword to the paper back edition Stanley says that Playthell has an “insatiable appetite for information, especially as it pertains to the story of the American Negro, American history, American Foreign policy, and the relationships between the western world and the rest of the people on the planet.” And these concerns can clearly be seen in his writings, which are broad and eclectic.

With a lively wit to compliment a broadly learned mind, Playthell is a great guest on television or radio and has shared the mike with some of the biggest host in television, including Geraldo Rivera and Bill Mahr, which can be soon viewed on You Tube. At Present he is completing two books :Quantum shift: Commentaries on the Obama Phenomenon and Jazz at Lincoln Center: Magic Moments In the House Of Swing, a collaboration with the renowned photographer Frank Stewart. Playthell has held a professorship in History/Afro-American Studies at the University of Massachusettes and recently held an adjunct professorship in journalism at  Long Island University.

His essays on music criticism have appeared in a wide variety of publications and his interest range from classical music to Jazz to Latin and Hip hop.  He writes program notes for Jazz at Lincoln center concerts and is an accomplished Latin percussionist who can be viewed playing with the group Zon Del Barrio on You Tube.

TruthWorks Network  offers diversified programming which values, maximizes and includes the special perspectives of Black American.  The network platform and microphone offers an alternative media for the “Black truth” on America.  It is a place where we come to examine, declare our injury, heal ourselves and prepare for new battles with new solutions.  At TruthWorks, we dare to believe in the Power of Truth.  TruthWorks Network broadcasts from the TruthWorks Studios at www.blogtalkradio.com/TruthWorks

The network broadcasts Soul AFIRE with Dr. Matthew V. Johnson, The ALFO Show, PowerViews and an assortment of issue specific broadcast projects, such as “Black Women in the Prism” and “Working While Black”. Learn more at www.truthworks.ning.com  Visit our website at www.truthworks.wordpress.com