The Warrior IN and Before Her Time 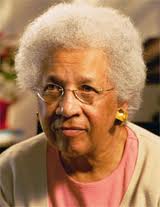 She was born Barbara Ann Laffoon in Chicago and raised in Terre Haute, Ind., where she graduated from high school at the age of 16. She earned both a bachelor's degree in classical languages and master's degree in elementary education from Northwestern University. She received a PhD from the University of Chicago in educational administration in 1979.﻿

She was a teacher and administrator with the Chicago public schools for 25 years, from 1947 to 1972, and professor and interim chairman of the Department of Black Community, Research and Education at the University of Pittsburgh from 1977 to 1992.

In 1992, she returned to Chicago, where she began her tenure as dean of the School of Education at DePaul niversity. At DePaul, she founded the School Achievement Structure, an organization that used the "Structured Ten Routines," a model that accelerates achievement and educational excellence in underachieving schools and districts. She retired in 1999 and lectured to thousands of educators and organizations about the model and other educational issues.

She was an educator, public speaker and scholar whose philosophy was that all children can learn and who throughout her career worked to close the achievement gap between black and white students. She encouraged educators to send more time teaching vocabulary and grammar to black students and supported teaching traditional methods of phonics for children who cannot read, rather than using the newer methods that allowed children to write without regard to correct spelling.

She was the first African American woman to head a major school system when she was chosen as superintendent of D.C. schools in 1973 which cascaded into a tumultuous politically charged tenure in her unrelenting challenge for educational excellence for the children, especially poor and urban children.

She called standardized tests "the new lynching tool" for the aspirations of African Americans and wrote in 1989 that "it seems the best way to eliminate tests is to help minorities to pass them." She added, "Tests can then become the diagnostic tools they were meant to be instead of the mechanism for separating winners and losers."

Dr. Sizemore made no secret that she was particularly interested in raising the academic achievement of African American students and stirred controversy when she said in a speech that she had "a higher calling than educating children, and that was uplifting my race." In the 1975 Washington Post interview, she added, "I did not understand that in order to be superintendent of schools I was to give up my higher mission."

Nancy L. Arnez, a retired professor of education at Howard University, wrote a case study of Dr. Sizemore's tenure and relationship with the school board called "The Besieged Superintendent." She said Sizemore was ahead of her time.

Dr. Sizemore tried to do some things in the District that people couldn't accept, Arnez said. "The fact that she could stand up to authority is one of the things that frightened people," she said in an interview in 1996 with Education Week. "Her approach to Congress was not one of supplication and of begging. She was just putting forth, in a strong manner, the kinds of things she had in mind to help these nonachieving students achieve."


After her superintendency, Dr. Sizemore turned briefly to politics. She ran as an independent in 1977 in a special election to fill an at-large D.C. Council vacancy created by the death of Julius W. Hobson Sr. and came within 683 votes of a political upset. A year later, she pulled out of a second race for the Democratic nomination for the at-large seat to return to her first love -- education.

"I'm not a politician. I'm an educator. That's what I'm trained to do. That's what I want to do," she said as she prepared to leave Washington to accept a job as head of the school system in Benton Harbor, Mich.


Dr. Sizemore was an author of scores of book chapters and journal articles. She wrote "The Ruptured Diamond: The Politics of the Decentralization of the District of Columbia Public Schools" (1981), and “Walking in Circles”.