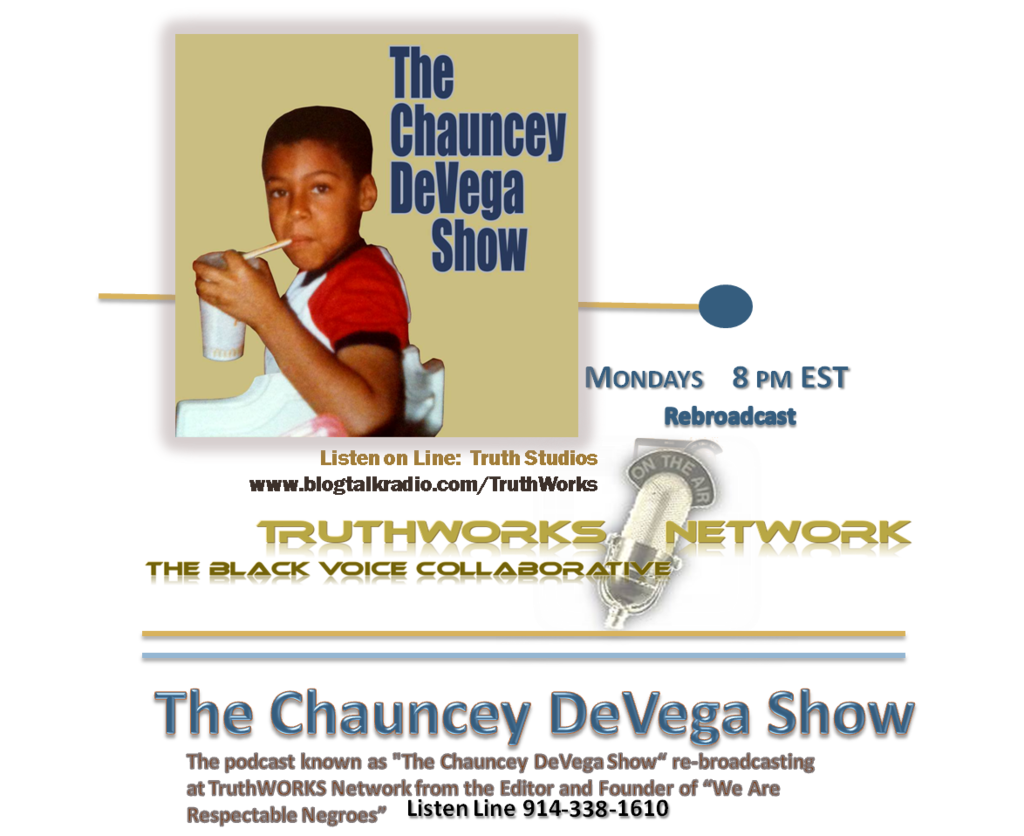 TruthWorks Networks is proud to announce the addition of “The Chauncey Devega Show” onto the TWN line-up of exceptional alternative broadcasting. New episodes of the TCDS will broadcast each Monday, 8 pm ET on the Black Voice Collaborative and available On-Demand beginning Monday, February 23, 2015.   Listen on Line  or from you smart device :  Truth Studios   www.blogtalkradio.com/TruthWorks or call and listen 914-338-1610.

The "Chauncey DeVega Show" is the official podcast for Chauncey Devega and the website "We Are Respectable Negroes" The format is simple: The Chauncey DeVega Show is a relaxed conversation with smart and interesting guests from backgrounds as varied as the arts and letters, cultural workers and musicians, social scientists and other academics, journalists, as well as Hollywood actors and directors.

Chauncey DeVega  is  a race man in progress, Black pragmatist, ghetto nerd, cultural critic and essayist. He  is  the editor and founder of the cerebral, informed and sometimes funny but  always insightful blog,  “We Are Respectable Negroes”.  He is   the host of the podcast known as "The Chauncey DeVega Show". He is smart, brave and unapologetic in all his brilliance.

He has been a guest on the BBC, Ring of Fire Radio, Ed Schultz, Make it Plain, Joshua Holland's Alternet Radio Hour, the Thom Hartmann radio show, the Burt Cohen show, and Our Common Ground with Janice Graham, and has appeared on the RT Network and Free Speech TV.

His writings have been featured by Salon, Alternet, The New York Daily News, and  regularly featured on “The Daily Kos”.

His work has been referenced by MSNBC, as well as online magazines and publications such as The Atlantic, Slate, The Week, The New Republic, Buzzfeed, The Daily Beast, The Washington Times, The Nation, and The Chronicle of Higher Education.

Judge him by his enemies. Fox News, Rush Limbaugh, Sean Hannity, Juan Williams, Herman Cain, Alex Jones, World Net Daily, Twitchy, the Free Republic, NewsBusters, the Media Research Council, Project 21, and Weasel Zippers who have made it known that they do not like me very much. If you seek an analysis of the facts in a fusion of  intelligent observation and alternative views , you might become a friend. We judge him by both, and you will too.

The Black Voice Collaboratiive "The Truth MUST be spoken more than once." Linking the best of Black dialogue and exchange Rational, informed and solution-based interchange for serious talk at every level.http://www.truthworks.ning.com/